ITOCHU Corporation (headquartered in Minato-ku, Tokyo; Masahiro Okafuji, President & CEO; hereinafter “ITOCHU”) announced today that it has acquired exclusive import and distribution rights in the Japanese market in respect of womenswear and fashion goods for the French contemporary brand Cacharel. Market release of the brand will commence from the 2015 autumn/winter season through CORONET CORPORATION (headquartered in Chiyoda-ku, Tokyo; Shigeaki Chiba, President; hereinafter “Coronet”).

The Cacharel brand was established in 1958 in Nîmes by Jean Bousquet, originally from Nîmes, France. It was catapulted into fame in 1963 when its crepe shirt featured on the cover of Elle magazine, going on to collaborate with various designers and photographers to create Cacharel’s romantic and feminine universe that continues to capture people’s hearts and minds today. From the time of its founding, its motto was “providing our customers with creative products at an affordable price,” an ethos that continues today with a product range that has expanded from apparel goods such as womenswear, menswear, and childrenswear to encompass fashion goods such as perfume and spectacles. This year, it began to operate a section in Printemps Department Store in Paris, with the opening of a flagship store in Paris planned for 2015, strengthening brand publicity.

Targeting sophisticated women in their 20s to 40s and utilizing Coronet’s abundant experience and expertise in the Japanese market, the brand will be sold in specialty stores and leading boutique stores selling select products, with shop-in-shops in department stores also planned. Moving forward, Cacharel will vigorously promote the worldview of the brand to increase brand exposure, with the aim of achieving retail sales of 1.2 billion yen in three years’ time. 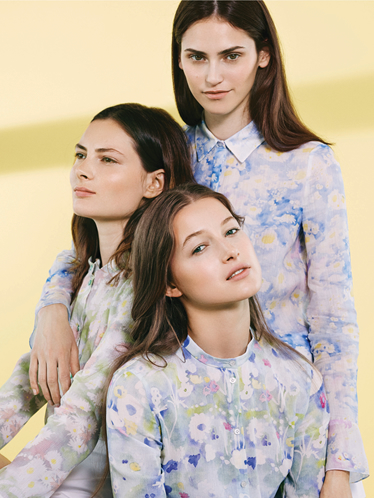