ITOCHU Corporation (headquartered in Minato-ku, Tokyo; Masahiro Okafuji, President & CEO; hereinafter “ITOCHU”) announced today that it has acquired exclusive import and sales rights in the Japanese market for the casual bag brand Eastpak that originated in the United States. The brand will start releasing its products from the 2015 spring/summer season through Coronet Corporation (headquartered in Chiyoda-ku, Tokyo; Shigeaki Chiba, President; hereinafter “Coronet”)

Eastpak’s roots date back to 1952, when Eastern Canvas Products Inc. was supplying high quality bags to the U.S. army. From 1976, the company started releasing products as the Eastpak brand for ordinary consumers, which enjoyed popularity mainly among university students on the East Coast. From there, the brand went on to boost its recognition to the West Coast, then further afield to Europe, and eventually worldwide. In the 2000s, the brand released numerous bags in collaboration with prominent fashion designers, establishing itself as an indispensable presence on the fashion scene. Today, Eastpak is gaining in worldwide popularity, primarily in Europe, as a sophisticated urban lifestyle brand incorporating cutting-edge trends, through a diverse product lineup that has moved beyond the staple backpack to encompass shoulder bags, accessories, Boston bags, and suitcases.。

ITOCHU will focus on further expanding brand recognition and enhancing brand value by strongly promoting the worldview of Eastpak as a fashion brand in the Japanese market. The collection will initially be released through the traditional sales channels of department stores, specialty stores, and select shops nationwide, followed by the accelerated expansion of new sales channels. The brand will aim for retails sales of two billion yen in three years’ time. 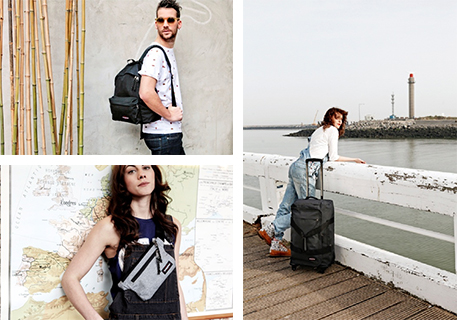